One thing I enjoy is taking photos of street art. During my stay in Oaxaca I found many interesting examples. Since I was living there for several months, I was able to collect quite a few photos that I took whenever I happened to walk by a wall with interesting art.

I was only in Mexico City for a week, so it was more difficult to just happen across something. I had heard that there were many great examples there, but how would I find them?

After Googling a bit, I found posts by travelers asking for tours of street art in Mexico City, but no real answers. There are websites with photos of Mexico City’s street art, but I couldn’t find an actual guide to where they were. (I guessed they were spread out all over and too difficult to visit in one day).

Then I remembered my iPhone app: Urban Buddy. It’s a new app for asking locals advice about things to do in their city. It contains the following cities:
– Chicago
– New York
– Mexico City
– Barcelona
– Paris
– Berlin

I had previously asked for a recommendation of a vegetarian restaurant near where I was staying and it worked great! A real person who works for the app (local to Mexico City) answered my question the same day.

This was my last day in Mexico City, and I thought it would be a long shot, but I tried it. I asked: “Where can I see good examples of street art? I’m staying in Condesa and today is my last day here. I’m looking for examples in safe neighborhoods I can reach by public transportation. Thanks!”

The same person who answered my other question got back to me and said he was going to ask advice of a friend who is an expert in Mexican art. Later he replied with a suggestion to visit a small “underground” museum called MUJAM: “Museo del Juguete Antiguo Mexico.” (Museum of Antique Toys) I was told that someone there could take me a place nearby that was full of excellent examples. He suggested I take a taxi there and gave me the address.

Since it was a Monday and I had heard that most museums were closed on Mondays, I was skeptical. I found their website, but couldn’t find the hours listed. Then the guy from Urban Buddy offered to chat with me via phone and sent me his number (via the app). I called him and he was very helpful. He explained that it’s so small that they would open the doors for me if I showed up and rang the bell. He said to ask them about the street art and they would take me to the place a few blocks away. He gave me the number for calling a safe taxi service (you can’t just hail cabs on the street in Mexico City because of the problem of fake cabs that mug tourists). He said to call him any time if I had any questions at all. So I decided to try it.

Wow, am I glad I did, because it was a wonderful, unique experience!

The cab took me there, it was only about a ten-minute ride from where I was in Condesa. As soon as I arrived, I starting photographing the amazing art in their parking lot.

I went up a little staircase, rang the bell and someone let me in. It’s a totally charming, campy, unique place full of old toys of all shapes and sizes. They asked me where I was from and what I was interested in, and I paid the entrance fee of $25 pesos (about $1.95). They introduced me to the founder of the museum, Roberto Shimizu. He gave me an interesting short tour (in English) and told me how and why he started this museum.

His parents came from Japan and opened a toy store years ago. Now he has inherited the building, and he wanted to preserve the history of ordinary toys, not expensive collector’s items, but toys that regular kids played with, since otherwise they would be destroyed. He explained that it’s financially possible, since he doesn’t have to pay rent, and keeps most of the lights off, and only hires a few people to work there. On his office door were photos of his family and himself as a child, and his grown children.

He showed me how all the cabinets and display cases were recycled items used in creative ways to display the toys. It was impressive and fun to wander around and look at everything!

His son works there also and is an expert in street art! (Roberto Y. Shimizu). So he was the next person I met and who showed me all the street art inside and outside the museum.

It was fun to see that many of the hallways, rooms and entryways were covered with amazing art. He took me around, showed me everything, and talked about the artists. 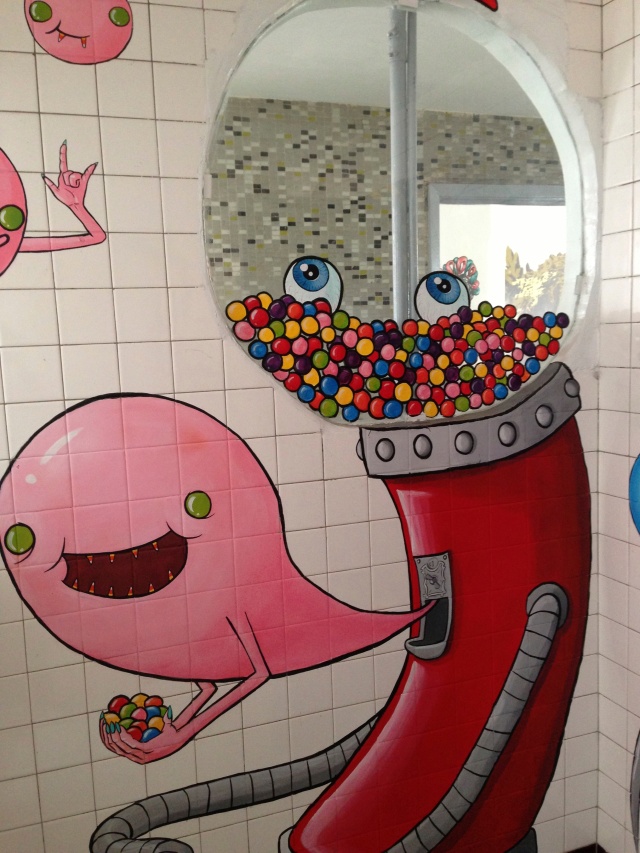 He led me to a room on another floor where they hold workshops for young people — aspiring street artists. He talked about his philosophy and asked me about my interest in the topic. (I like art that is outside of museum walls and is for everyone, and I enjoy photographing it for fun). He organized a conference last year, and showed me a short video about street art in Mexico City. I mentioned that my sister is an art therapist and works with victims of trauma. We talked about the healing power of art. He said he might like to talk with her sometime because he is researching this topic. I offered to put them in touch.

The amount of creativity, playful spirit, and whimsicality in this place was amazing! Around every corner was something funny, profound, unique, colorful, or eye-catching. I was constantly snapping photos with my iPhone.

He took me back outside and talked about the various murals on the outside of the building. Then he gave me directions to a warehouse nearby with more art.

After a ten-minute walk or so, I found the warehouse. It was obvious which one it was, because it was covered with beautiful murals. A security guard let me in and from there I wandered around and took lots of photos. It’s a huge warehouse with several corridors and almost every inch is covered with art. Here are some examples. 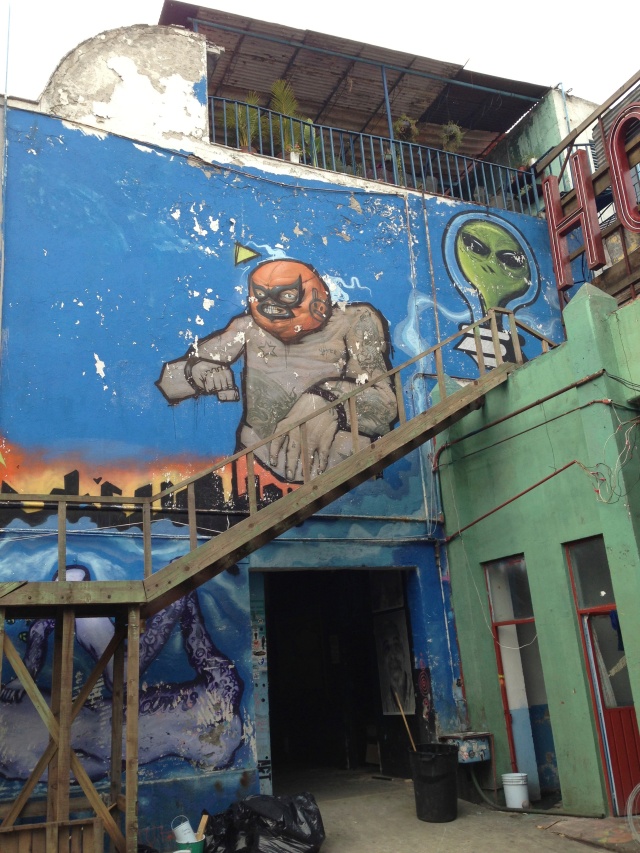 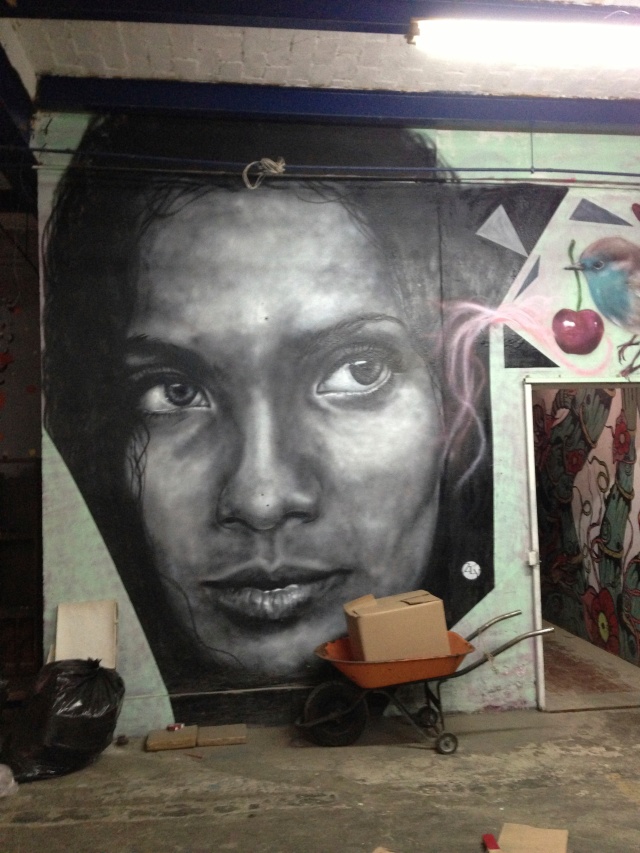 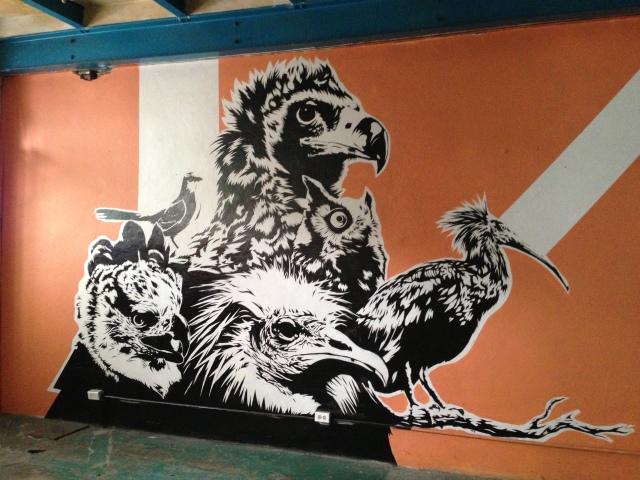 My favorite piece was this Wizard of Oz mural.

I chatted a bit with the guard, and he encouraged me to also look at what was one the roof (even more art).

I had so much fun here and felt like it was a unique experience that I wouldn’t have had without the advice of “Urban Buddy.” So I wrote back to thank the guy from Urban Buddy.

If you’re ever in Mexico City and if you have the slightest interest in street art or antique toys, I highly recommend visiting MUJAM, both the museum and the warehouse a few blocks away. 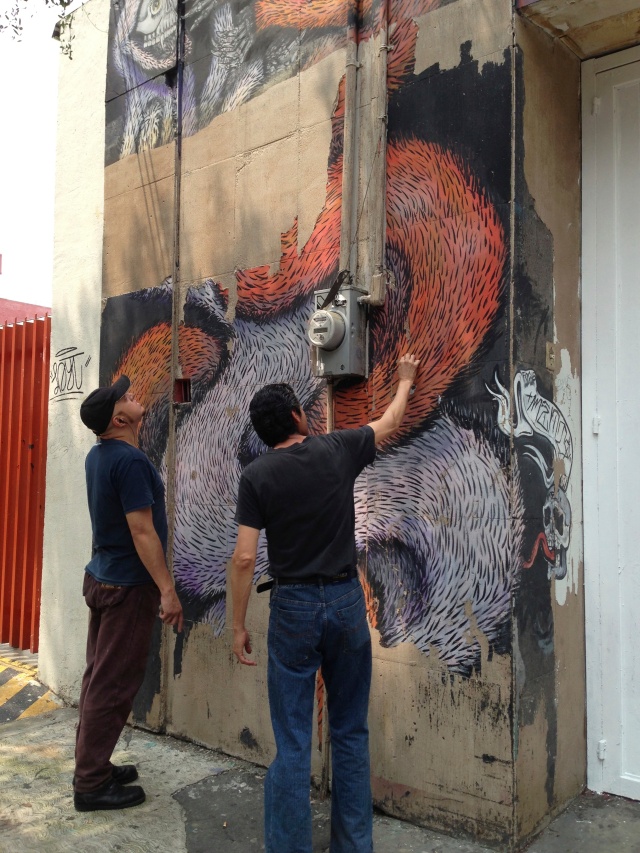 Here’s a short video about the museum. 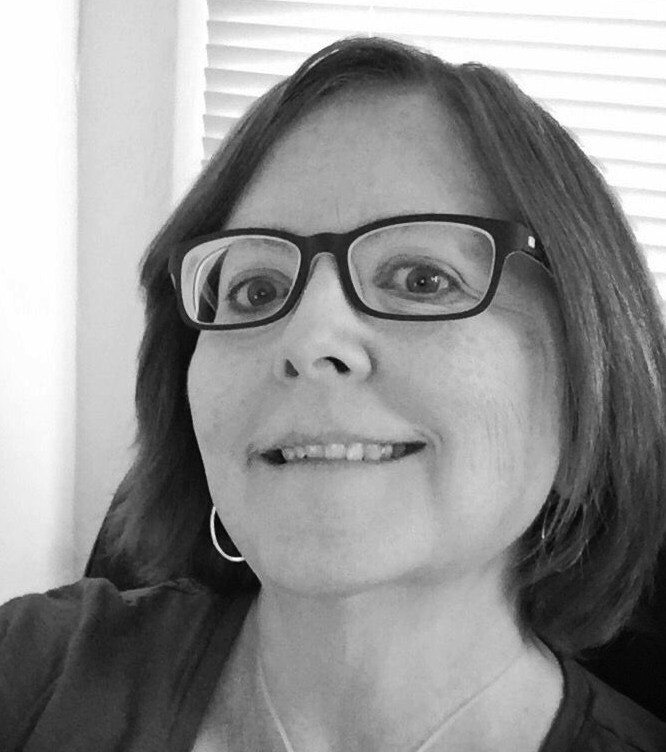