This article is part 2 of a series. See also: Why I prefer access to ownership, part 1: cars, books and more

I like the idea of not owning a place to live, but instead having access to well-designed living spaces that I can use as needed — like Zipcar, but for housing.

Since I didn’t purchase real estate until later in life (and right before the housing crash), I never made money from it or built equity (since I had 100% financing). It’s currently breaking even as a rental and when the value comes back up to a little more than I owe, I’ll probably sell it, since I don’t want the responsibility of owning something in a city where I don’t spend much time.

I like the idea of moving at different times of year (for good weather, and to be near my different communities of friends & family). So I’m interested in short-term rentals. I wish that 12-month leases were not the standard in most places.

When you search for short-term housing in different cities, often you find housing designed for business executives who are re-locating or spending a few months in a different location (priced according to what their companies can pay)! The lower-cost options are usually in cookie-cutter suburban hotels where you would need a car to get around… not appealing to me.

For me, the ideal would be a well-designed, small living space, in a walkable neighborhood, with reasonable rent, furnished, and with an option for leasing between 3 and 6 months.

Luckily, some options are starting to appear for short-term, flexible housing in walkable, urban neighborhoods — Airbnb, micro-apartments (or micro-lofts), and “open-source housing.”


When I first came across the idea of micro-apartments, I got excited! That’s just what I’ve been looking for! I found stories about how it’s a growing trend in places like Seattle to offer modern, tiny units, in good, walkable, central neighborhoods — the kinds of neighborhoods that usually have very high rents.

I’ve been following the “tiny house” movement for a few years now. I like the idea of living simply, in a custom-built, beautiful house, with high-quality features. The cost can be low because they are so small! But the one problem with owning a tiny house is that it can be hard to find land to put it on — especially if you want to live in an urban area.

So “micro-apartments” are one answer to this. The ones I’ve read about usually have simple, modern designs, with big windows, lots of light, very high ceilings, sometimes with a tiny kitchenette and a full kitchen down the hall that is shared by people on the same floor (some have full kitchens). I don’t cook much anyway — if I have a blender for my smoothies, and a vegetable steamer for my veggies and rice, I’m happy. Living in a good neighborhood with coffee shops and cafes means it’s possible to get a good salad for lunch somewhere or visit a food truck with good, healthy, cheap food.

I’ve heard of micro-apartments with rents as low as $525/month in Seattle! Amazing. Some of them have short-term leases and most are furnished as well.

Some of them are called “micro-lofts” or “apodments.” In Seattle there has been some push-back from local home-owners, but once they are built, the projects are successful. Here’s a quote from: Real Estate Buzz: Lenders — and tenants — like ‘apodments.’

The idea of rooming houses — all that density along with what Dirk Mulhair says is their reputation as “crack-ridden, slum-lord-owned, rundown places” — is enough to scare off even the boldest of investors and the bravest of tenants. He says the key to operating a successful boarding house is a hands-on management style that emphasizes respect and dignity for tenants. “We are very customer-driven.”

Calhoun and Kauri refer to their tenants as “partners.” Dirk Mulhair says he knows every resident by name. The process of signing a lease is thorough. Properties have onsite managers and security systems, and the buildings are regularly maintained.

Residents range from baristas to white-collar professionals who live outside the city but want a place to stay when they’re in town.

It seems to me that there are people in different stages of life who could benefit from this type of housing. It can be more eco-friendly and it maximizes the use of land. For more about this, see: Micro-Apartments: Modular Building and Affordability in San Francisco.

“The micro-apartments by their very nature use far fewer materials to satisfy basic housing needs; they’re also super efficient in terms of energy consumption. I think our typical apartment’s electrical bill is less than 15 bucks a month,” Kennedy said. The buildings are also car-free—a requirement Panoramic Interests deliberately looks for when scouting sites, with a car-share pod in the front, and it makes use of solar heating and solar-heated hot water.

“They’re generally triple the density of a typical apartment building, so they’re far more efficient in their use of the very limited natural resource of land,” Kennedy said.

Another idea I came across is “open-source housing.” It doesn’t seem to be a widespread trend yet, but it’s the idea of creating a membership system of shared housing located around the world. Once you join, you can move between places in different cities, as space is available. It reminds me of Zipcar, in that you have access to several different housing options that you can move between (like having access to many different cars).

One article I read was about a group of entrepreneurs in San Francisco, who are starting a community like this. They like the idea of creative interchange of ideas by living with other entrepreneurs. I like this idea and would like to try it sometime! I’ve signed up for the Embassy Network waiting list. They are currently in private beta.

The third option that seems interesting to me is Airbnb. You've probably heard about it as an alternative to staying in hotels when you travel. People offer a room in their house, or an entire house or apartment to travelers. It's been very successful so far and is growing fast, with locations around the world. The Airbnb system makes it easy to search for the kind of place you would like to stay in, based on location, amenities, and the reviews and ratings of the hosts, by others who have stayed there. They handle the payment system, and assist you if there are any problems.

Airbnb listings are also available by the month. You can search for places that are available for one to several months, browse the photos, read reviews, and communicate with potential hosts.

People sometimes make a good extra income by renting out part or all of their place. It's a system that helps both hosts and visitors, because it helps to establish trust.

I like the idea of staying in Airbnb locations for a month or two as a way to explore the idea of living in a new city. I'm planning on trying this in 2014, with plans to explore various neighborhoods in Los Angeles, Portland, and Seattle. That way, I can see first-hand what it's like to live in those cities before committing to a longer-term stay.


As I write this post, I’m staying in an cute little cottage in Monterey, CA, that I booked for a month with Airbnb. It’s great! I also enjoyed a week-long stay at an Airbnb apartment in Mexico City recently.

Other ways to live cheaply 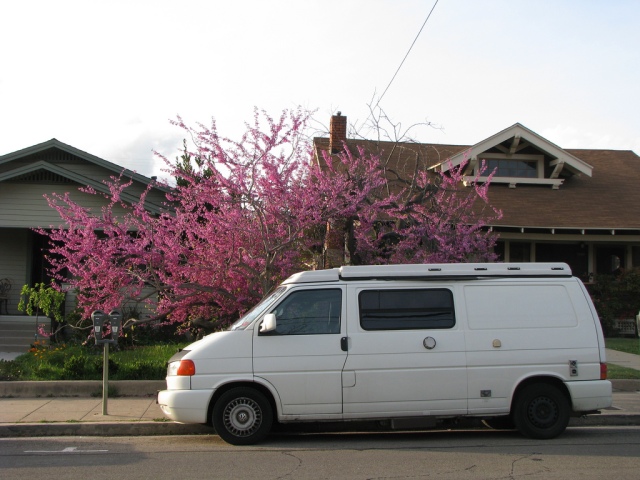 These next ideas aren't for me, but they are interesting! People are living in their cars, vans, trucks or RVs in urban areas. There have been some interesting articles about this lately. I admire the people who have what it takes to do this!

Living in your car or van

Stylish trailer parks for elder living with community and autonomy:

Take a look at this very interesting and sweet article about living in a trailer park… it goes against all the stereotypes. What a community!

I love thinking about ideas like these! It seems to me that life is better with fewer possessions and more time and money to spend on experiences. I'm looking for ways to live without needing much money, but still having VERY good quality of life.

When your work is not tied to one location, that makes many of these ideas possible. And because of the internet, it's much easier to stay in touch with friends and families in different locations than it used to be.

My ideal way of life would be to continue to do work I enjoy online, but with gradually reducing hours as I get older (no hard and fast date of "retirement"). To have communities of loved ones in a few different cities and to move between them flexibly. To live in places with moderate temperatures: mild winters, and summers that aren't too hot. And to be able to travel for longer periods to various countries (like the 5 months I spent in Oaxaca, Mexico this year).

When I'm thinking about how much I can spend on rent, I don't look at it as a fixed monthly cost, but a variable one — focusing on the average monthly amount for a year. For example, in 2014 it might work like this: higher rent in January – April as I explore different west coast cities, and then lower rent from May – October if I live in Omaha for six months. Then even lower rent if I go back to Mexico for November – December. It all averages out to an affordable amount. I'll still visit my close friend/family communities in Boston and Vermont for Christmas. It makes for a very interesting life for me!

Will I ever settle in one place?

This is a question I get asked a lot. The answer is yes! But maybe two places (seasonally). For this year and next, I’m happy to be a “digital nomad.” It’s fun to explore different locations and it’s a way to live frugally while I’m getting my businesses off the ground. (See my post on travel hacking for how I save money on flights. All my flights this year have been paid for with rewards points!)

I know this way of life isn’t for everyone, but I think we’ll see more people choosing this in the future because of how the Internet has changed the world. What do you think? I’d love to hear your comments!

This article is part 2 of a series. See also: Why I prefer access to ownership, part 1: cars, books and more

One thought on “Why I prefer access to ownership, part 2: housing”